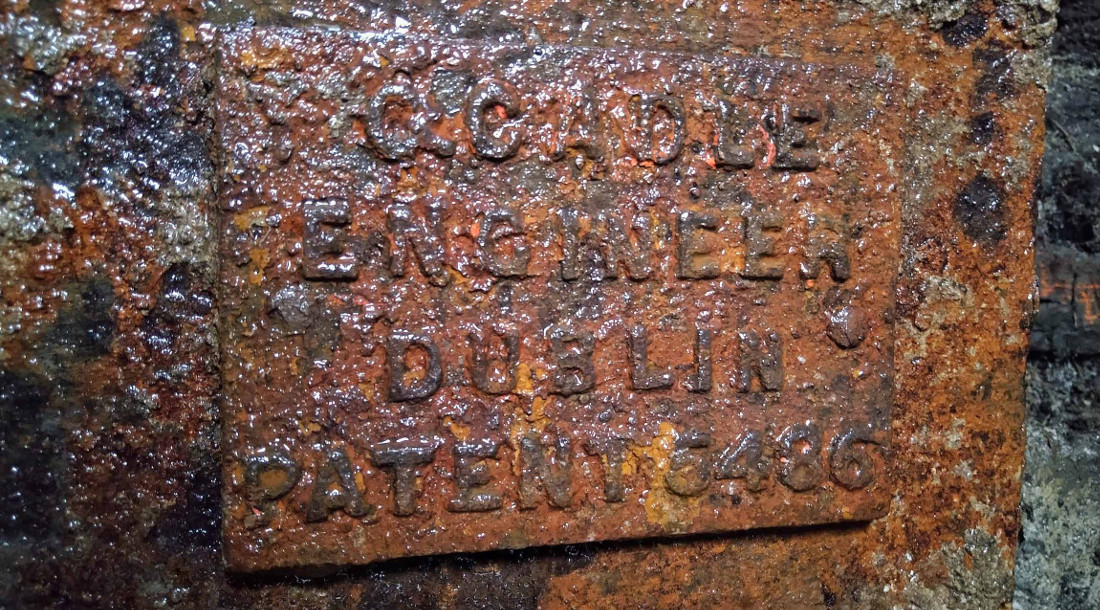 One of the challenges of running tours of the farm and brewery is getting the correct information to give to our visitors. Much of the time, I'm working off a combination of educated guesswork and speculation, and I spend more time saying "we think" and "probably" than I'm completely comfortable with. The millhouse in the yard is no exception. For years, I've been telling visitors that it was built in around 1820, and used to be powered by a timber bladed propellor that turned the gears when the water in the mill race (the canal that brings the water from the river to the mill) flowed past it, but the reality looks to be a bit more sophisticated.

On Friday last, we opened up the 2 metre deep mill race that runs under the centre of the building. When I got down into it to have a closer look at the mechanism, it's clear that it's a lot more advanced than a simple timber propellor - I'd describe it more like a hydro powered jet engine, with steel blades in a turbine that was driven by water controlled by a sluice gate on the mill floor. Thanks to Gordon from the 9 White Deer Brewery in Cork, I now know that it's a horizontal pelton turbine. On a plate above the mechanism is a plaque with the words

So here's what we know for sure. The millhouse is on our 1855 estate map, so it was definitely built at that stage. Cornelius Cadle was born in Dublin in 1847, and married an Abbeyleix woman in 1873. After that, we're back into speculation. We've always reckoned that the millhouse was built in around 1820. It's definitely later than the rest of the farmyard, because you can see where the 18th century grain store was blocked up when it was added on. I'm guessing that the Cadle turbine was installed after 1873, when Cornelius had a Laois connection, so chances are it's a second generation system to replace the one that was originally put in when the millhouse was built. They seem to have taken the chance to upgrade the walls around the mill race to mass concrete at the same time. Again, I'm guessing these were stone walls when it was first built: the rest of the race in the yard is stone lined, and mass concrete wasn't used in Ireland until the 1850s.

It must have been state of the art when it was installed, but it was probably only in use for 30 or 40 years before the whole system was replaced by a steam engine. You can still see where a belt driven wheel was added to the mill shaft, and one of the arches was knocked out to get the belt out to an engine that would have stood just outside the building. Even in the early 1900s, you couldn't stand in the way of progress.

So what's next for the millhouse? We discovered the Cadle turbine because we're cleaning up the mill race as much as we can to get it ready for conversion into our farm and brewery visitor centre. The plan (budget permitting) is to install a small section of glass so that all our visitors will be able to see down into the section of race that runs under the building. If we get very ambitious, we might try to put water back into a small section of the rest of the race. It was originally fed from the nearby river, but that was dredged in the mid 20th century to help alleviate flooding in Stradbally and the level has now dropped to well below the entrance into the race. The rest of the visitor centre will be completed by the summer (covid permitting), and we hope you'll all be able to come and have a look at Cornelius Cadle's handiwork and join me in a bit of idle speculation.

← Back to main blog page